February 1997: The heat, the fear and the sour smell of sweat that they triggered hung heavy in the stale air of the courtroom. Every window had been bricked over because of the security risk. Witnesses and judges alike knew they risked their lives by their very presence. There was no air-conditioning, but then there was frequently no electricity, either. The reek in the courtroom mingled with the stench of the sole toilet, foul from lack of water. 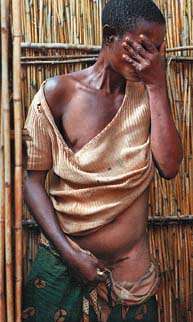 A Burundian Hutu woman , age 40, who was raped and stabbed while pregnant by Tutsi soldiers almost three years ago. At the same time her husband was abducted and killed and their home set on fire with five of her six children inside. All five died. She was unable to walk for some time, but she was finally able to walk to escape Burundi. She has been living in Kenembwa refugee camp since July 1996 and has been able to receive counseling. PG Photo by Martha Rial December 1996. © Pittsburgh Post Gazette

In Arusha, Tanzania, the Rwandan war-crimes tribunal was into the third year of its four-year term, and the first trial of genocide had only just begun. In the dock, Jean-Paul Akayesu was charged with giving orders for, and participating in, “crimes against humanity.” The woman nervously testifying against Akayesu was confronting him for the first time since she had allegedly witnessed the atrocities he stands accused of committing.

She told her story simply. Her slow delivery gave her words even greater impact as she waited patiently for the interpreters to repeat them in French and English, the official languages of the court. She was seven months’ pregnant in the summer of l994, when she and her neighbors fled their village. Before the slaughter began, she had managed to hide in a tree, where she stayed for several days. She came down at night to look for food. What she found instead were the bodies of her mother, her children, her sisters and brothers — their corpses thrown into a latrine pit. Then her father was killed directly beneath the tree in which she was hiding. That night she came down again to bury him because dogs were eating the bodies.

She lost track of how long she stayed in the tree, but she finally judged it safe to leave. It was then that she found her 6-year-old daughter, still alive. Together they started to escape from the area, but didn’t get far before they were caught. Her little girl was gang-raped by three men. Yes, she knew who they were. Yes, she could name them. Her sworn statement taken before the hearing mirrored the evidence she gave in court, except for the gang rape of her 6-year-old. It wasn’t included in the indictment because the investigators hadn’t asked the mother about rape.